Jeremiah 15:9 - She languishes who has borne seven; She has breathed her last; Her Sun (King of Judah) has gone down While it was yet day; She has been ashamed and confounded. And the remnant of them I will deliver to the sword Before their enemies, says the Lord.

Matthew 24:29 - Immediately after the tribulation of those days shall the sun be darkened, and the moon shall not give her light, and the stars shall fall from heaven, and the powers of the heavens shall be shaken:

Isaiah 60:20 - Your sun (King) shall no longer go down, Nor shall your moon withdraw itself; For the Lord will be your everlasting light, And the days of your mourning shall be ended.

Isaiah 13:10 - For the stars of heaven and the constellations thereof shall not give their light: the sun shall be darkened in his going forth, and the moon shall not cause her light to shine.

Ezekiel 32:2 - Son of man, take up a lamentation for Pharaoh king of Egypt, and say to him: 'You are like a young lion among the nations, And you are like a monster in the seas, Bursting forth in your rivers, Troubling the waters with your feet, And fouling their rivers.

Ezekiel 32:8 - All the bright lights of the heavens I will make dark over you, And bring darkness upon your land, Says the Lord God.

Isaiah 24:23 - Then the moon will be disgraced And the sun ashamed; For the Lord of hosts will reign On Mount Zion and in Jerusalem And before His elders, gloriously.

Isaiah 24:21 - It shall come to pass in that day That the Lord will punish on high the host of exalted ones, And on the earth the kings of the earth.

Did the Sun become dark after Pentecost?

Joel 2:10 - The earth shall quake before them; the heavens shall tremble: the sun and the moon shall be dark, and the stars shall withdraw their shining:

Joel 2:31 - The sun shall be turned into darkness, and the moon into blood, before the great and the terrible day of the LORD come.

Joel 3:15 - The sun and the moon shall be darkened, and the stars shall withdraw their shining.

Acts 2:16 - But this is (present tense) that which was spoken by the prophet Joel;

Acts 2:20 - The sun shall be turned into darkness, and the moon into blood, before that great and notable day of the Lord come:

Sun darkened during the destruction of the 10 tribes of Israel

Amos 8:1 - Thus the Lord God showed me: Behold, a basket of summer fruit.

Amos 8:2 - And He said, Amos, what do you see? So I said, A basket of summer fruit. Then the Lord said to me: The end has come upon My people Israel; I will not pass by them anymore.

Amos 8:9 - And it shall come to pass in that day, says the Lord God, That I will make the sun go down at noon, And I will darken the earth in broad daylight

Amos 8:10 - I will turn your feasts into mourning, And all your songs into lamentation; I will bring sackcloth on every waist, And baldness on every head; I will make it like mourning for an only son, And its end like a bitter day.

The 4th Trumpet marks the Final Overthrow of Western Roman Empire by Odoacer the Heruli in 476 A.D. This trumpet represents the downfall of Roman leadership when Romulus Augustulus, the last Roman Emperor of West was captured. The Heruli, a branch of the Goths, under the leadership of Odoacer, invaded and conquered the city of Rome in 476 A.D.

Flavius Odoacer became the first King of Italy (476–493 A.D). His reign is commonly seen as marking the end of the Western Roman Empire. In 476 A.D, Orestes refused to grant Odoacer and the Heruli federated status, prompting an invasion. Orestes fled to the city of Pavia in August 476 A.D, where the city's bishop gave him sanctuary. Orestes was soon forced to flee Pavia when Odoacer's army broke through the city walls, and his army ravaged the city. Odoacer's army chased Orestes to Piacenza, where they captured and executed him. 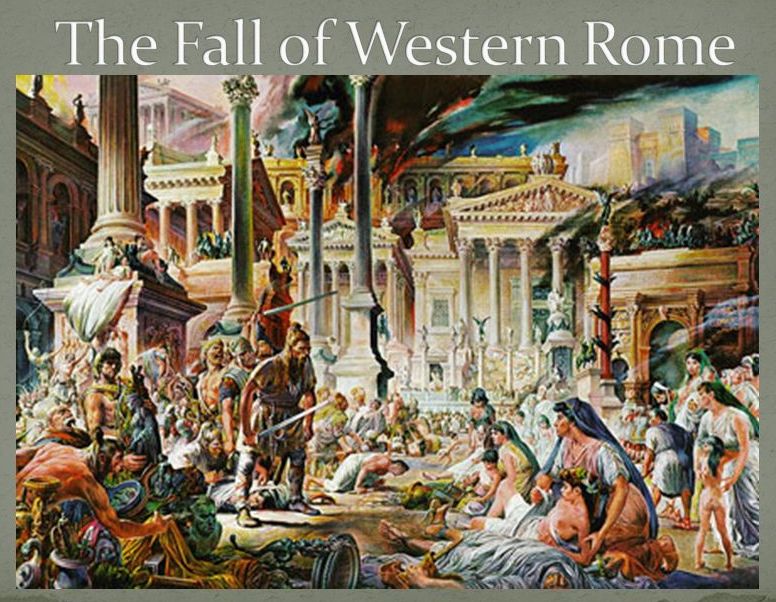 The fourth trumpet entirely took away the light of Roman majesty in the city of Rome. The sun shone at Rome as long as the kingdom was possessed of authority over other cities and provinces. The moon and the stars shone there, as long as the ancient power of the senate, and of the other magistrates, remained. But these being all taken away in this trumpet, what was there but darkness.

It only took 76 years for the Goths, Huns, Vandals and Heruli, to conquer the Western Roman Empire, which is why only 7 verses were devoted to the first four trumpets of Judgement.

You will see that the 5th and 6th trumpets spanned greater periods of time, thus there are more details given about them in Revelation 9.

Revelation 8:13 - And I beheld, and heard an angel flying through the midst of heaven, saying with a loud voice, Woe, woe, woe, to the inhabiters of the earth by reason of the other voices of the trumpet of the three angels, which are yet to sound!

There still remain three trumpets, the greatest and most grievous of all, and therefore discriminated from the former by the appellation of Woes.

Since the Christian inhabitants of the Roman world, while the other trumpets were sounding, had contaminated themselves with the worship of idols, the trumpets which remained were made more important for the purpose of punishing the double sin (Idol worship & killing of martyrs).

For it is apparent that this sin likewise of the Roman world together with the former one of the slaughter of the martyrs was reckoned in the account of the crime to be avenged;

Idol worship is clearly meant in the following verse:

Revelation 9:20 - And the rest of the men which were not killed by these plagues yet repented not of the works of their hands, that they should not worship devils, and idols of gold, and silver, and brass, and stone, and of wood: which neither can see, nor hear, nor walk.