Revelation 16:17 - Then the seventh angel poured out his bowl into the air, and a loud voice came out of the temple of heaven, from the throne, saying, It is done!

Revelation 16:18 - And there were noises and thunderings and lightnings; and there was a great earthquake, such a mighty and great earthquake as had not occurred since men were on the earth.

Revelation 16:19 - Now the great city was divided into three parts, and the cities of the nations fell. And great Babylon was remembered before God, to give her the cup of the wine of the fierceness of His wrath.

Revelation 16:20 - Then every island fled away, and the mountains were not found.

Revelation 16:21 - And great hail from heaven fell upon men, each hailstone about the weight of a talent. Men blasphemed God because of the plague of the hail, since that plague was exceedingly great.

Vial poured into the Air

Satan is called the Prince of the Air. The Seventh Vial is poured into the Air to completely destroy the power of Satan. This vial differs from all the rest - that whereas the rest only affect some part or branch of the antichristian state, this will affect all the remains of the Pagan, Papal, and world powers, gathered and united together;

The pouring out of this vial is the execution of divine wrath and vengeance upon them all at once;

This will be the third and last woe, which will utterly destroy those that have destroyed the earth (Rev 11:18), Pagans, Papists, and all the open enemies of Christ, so that nothing will lie in the way of His Kingdom;

Haggai 2:21-22 - Speak to Zerubbabel, governor of Judah, saying: I will shake heaven and earth. I will overthrow the throne of kingdoms; I will destroy the strength of the Gentile kingdoms. I will overthrow the chariots And those who ride in them; The horses and their riders shall come down, Every one by the sword of his brother.

Ezekiel 31:2 - Son of man, say to Pharaoh king of Egypt and to his multitude: Whom are you like in your greatness?

Ezekiel 31:3 - Indeed Assyria was a cedar in Lebanon, With fine branches that shaded the forest, And of high stature; And its top was among the thick boughs.

Ezekiel 31:16 - I made the nations shake at the sound of its (Egypt) fall, when I cast it down to hell together with those who descend into the Pit; and all the trees of Eden, the choice and best of Lebanon, all that drink water, were comforted in the depths of the earth.

Ezekiel 5:1 - And you, son of man, take a sharp sword, take it as a barber's razor, and pass it over your head and your beard; then take scales to weigh and divide the hair.

Ezekiel 5:2 - You shall burn with fire one-third in the midst of the city, when the days of the siege are finished; then you shall take one-third and strike around it with the sword, and one-third you shall scatter in the wind: I will draw out a sword after them.

Ezekiel 5:12 - One-third of you shall die of the pestilence, and be consumed with famine in your midst; and one-third shall fall by the sword all around you; and I will scatter another third to all the winds, and I will draw out a sword after them.

Great city divided into three parts denotes the utter ruin of the Antichrist Papacy (Catholic Church), and its dominion. 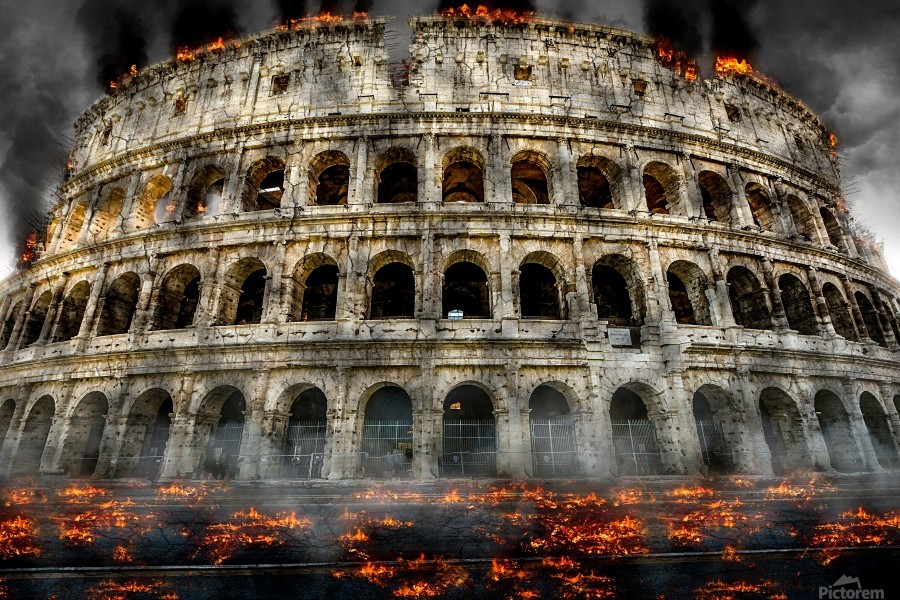 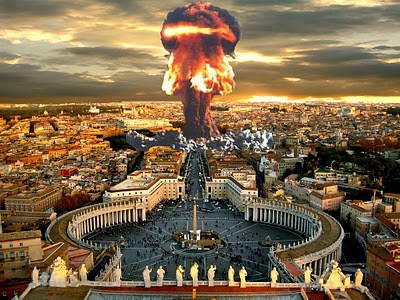 Revelation 17:16 - And the ten horns which you saw on the beast, these will hate the harlot, make her desolate and naked, eat her flesh and burn her with fire.

Revelation 18:8 - Therefore her plagues will come in one day--death and mourning and famine. And she will be utterly burned with fire, for strong is the Lord God who judges her.

Revelation 11:8 - And their dead bodies will lie in the street of the great city which spiritually is called Sodom and Egypt, where also our Lord was crucified.

Revelation 14:8 - And another angel followed, saying, Babylon is fallen, is fallen, that great city, because she has made all nations drink of the wine of the wrath of her fornication.

Revelation 16:19 - Now the great city was divided into three parts, and the cities of the nations fell. And great Babylon was remembered before God, to give her the cup of the wine of the fierceness of His wrath.

Revelation 17:18 - And the woman whom you saw is that great city which reigns over the kings of the earth.

Revelation 18:10 - standing at a distance for fear of her torment, saying, Alas, alas, that great city Babylon, that mighty city! For in one hour your judgment has come.

Revelation 18:16 - and saying, Alas, alas, that great city that was clothed in fine linen, purple, and scarlet, and adorned with gold and precious stones and pearls!

Revelation 18:18 - and cried out when they saw the smoke of her burning, saying, 'What is like this great city?

Revelation 18:19 - They threw dust on their heads and cried out, weeping and wailing, and saying, 'Alas, alas, that great city, in which all who had ships on the sea became rich by her wealth! For in one hour she is made desolate.

Revelation 18:21 - Then a mighty angel took up a stone like a great millstone and threw it into the sea, saying, Thus with violence the great city Babylon shall be thrown down, and shall not be found anymore.

The great hail, I believe, is pointing to Nuclear bombs just like the fire, smoke & brimstone in Rev 9:17 was pointing to Gunpowder used in Cannons, which resulted in the Final Fall of the Roman Empire (Constantinople) during the Sixth Trumpet.

Revelation 16:14 - For they are spirits of demons, performing signs, which go out to the kings of the earth and of the whole world, to gather them to the battle of that great day of God Almighty.

Since the Great Harlot (Catholic Church & Rome) was not destroyed in the First Two World Wars and it is prophesied to be destroyed by Fire (Rev 17:16 & 18:8), the destruction could happen as part of the Third World War.

The public is practically unaware of the overwhelming responsibility carried by the Vatican and its Jesuits in the starting of the two world wars – a situation which may be explained in part by the gigantic finances at the disposition of the Vatican and its Jesuits, giving them power in so many spheres, especially since the last conflict. Source: Edmond Paris, The Secret History of the Jesuits

We could see World War III on the horizon as many countries are involved in a Nuclear Arms race. 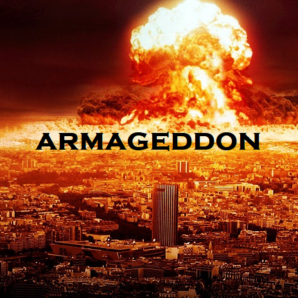 Mystery Babylon destroyed in One Hour

Revelation 18:10 - standing at a distance for fear of her torment, saying, Alas, alas, that great city Babylon, that mighty city! For in one hour your Judgement has come.

Revelation 18:17 - For in one hour such great riches came to nothing. Every shipmaster, all who travel by ship, sailors, and as many as trade on the sea, stood at a distance

Revelation 18:19 - They threw dust on their heads and cried out, weeping and wailing, and saying, Alas, alas, that great city, in which all who had ships on the sea became rich by her wealth! For in one hour she is made desolate.

World War III could complete in 15 days (One Hour) during which, the Great Harlot (Roman Catholic Church) will be destroyed.

Hebrews 10:13 - from that time waiting till His enemies are made His footstool.

This will pave the way for the Glorious return of our Lord Jesus because Jesus will not return until all his enemies are made His footstool (Hebrews 10:13).

Revelation 19:19 - And I saw the beast, the kings of the earth, and their armies, gathered together to make war against Him who sat on the horse and against His army.

Revelation 19:20 - Then the beast was captured, and with him the false prophet who worked signs in his presence, by which he deceived those who received the mark of the beast and those who worshiped his image. These two were cast alive into the lake of fire burning with brimstone.

When the Beast and False Prophet make war against the Lord, no Harlot Babylon appears seated upon the Beast. Before that date she has been suddenly destroyed.

Every Island fled away & Mountains were not found = Fall of Nations

Job 9:5-6 - He removes the mountains, and they do not know When He overturns them in His anger; He shakes the earth out of its place, And its pillars tremble;

Ezekiel 38:20 - so that the fish of the sea, the birds of the heavens, the beasts of the field, all creeping things that creep on the earth, and all men who are on the face of the earth shall shake at My presence. The mountains shall be thrown down, the steep places shall fall, and every wall shall fall to the ground.

World War III could be that Great Earthquake

Revelation 16:18 - And there were noises and thunderings and lightnings; and there was a great earthquake, such a mighty and great earthquake as had not occurred since men were on the earth.

Hebrews 12:26-27 - whose voice then shook the earth; but now He has promised, saying, Yet once more I shake not only the earth, but also heaven. Now this, Yet once more, indicates the removal of those things that are being shaken, as of things that are made, that the things which cannot be shaken may remain.

Ezekiel 38:20 - ...The mountains shall be thrown down, and the steep places shall fall, and every wall shall fall to the ground.

We could be back to stone age in a span of few days if World War III happens. Let's not hold on to the worldly things. Instead, let's focus on preparing our soul to meet Jesus. Let's Repent & turn back to Jesus. 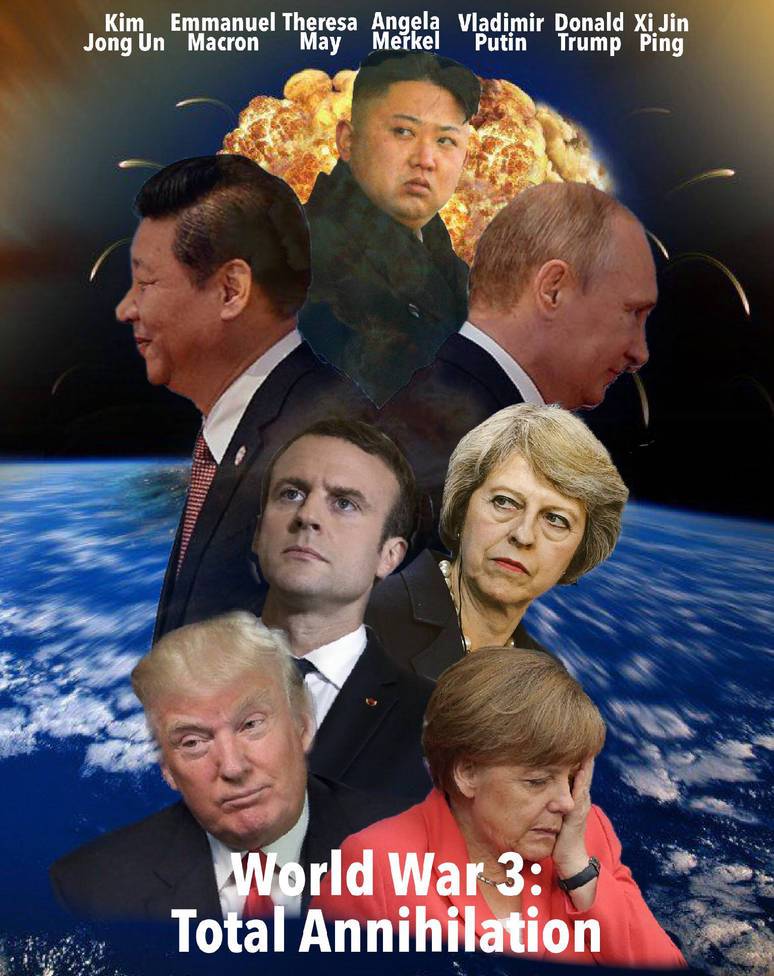 Romans 8:38-39 - For I am persuaded that neither death nor life, nor angels nor principalities nor powers, nor things present nor things to come, nor height nor depth, nor any other created thing, shall be able to separate us from the love of God which is in Christ Jesus our Lord.