Revelation 8:1 - When He opened the seventh seal, there was silence in heaven for about half an hour.

Revelation 8:2 - And I saw the seven angels who stand before God, and to them were given seven trumpets.

The 7th Seal is divided into 7 Trumpets. The seven trumpets represent the seven Judgements that God had in store for the Roman Empire (Western & Eastern Roman Empire). 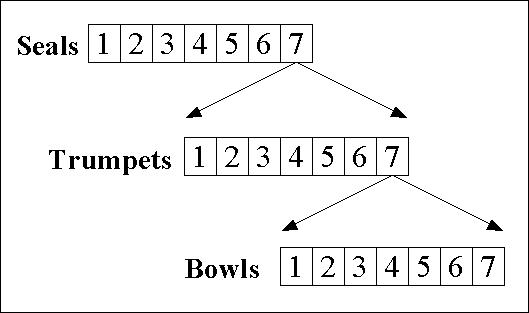 Ezekiel 33:3 - when he sees the sword coming upon the land, if he blows the trumpet and warns the people,

Ezekiel 33:4 - then whoever hears the sound of the trumpet and does not take warning, if the sword comes and takes him away, his blood shall be on his own head.

Ezekiel 33:5 - He heard the sound of the trumpet, but did not take warning; his blood shall be upon himself. But he who takes warning will save his life.

Ezekiel 33:6 - But if the watchman sees the sword coming and does not blow the trumpet, and the people are not warned, and the sword comes and takes any person from among them, he is taken away in his iniquity; but his blood I will require at the watchman's hand.

God, in truth, is executing Trumpet judgements for the blood of so many martyrs shed under Roman auspices. For He whose will it is that even brute animals should not be spared if they have slain man (Genesis 9:5) made in His image, would He not require the blood of His servants of the Roman empire which had been a killing Christians for so many years?

In the old testament, God promised to punish Israel for the blood spilt by king Manasseh (2 Kings 21:10-16). Manasseh's grandson King Josiah was a righteous man like king David (2 Kings 23:1-25). Even the piety of Josiah could not convince God from pardoning Israel.

2 Kings 23:26 - Notwithstanding the LORD turned not from the fierceness of his great wrath, wherewith his anger was kindled against Judah, because of all the provocations that Manasseh had provoked him withal.

Likewise, neither could the late piety of the Christian emperors (Constantine & Theodosius) avail to intercede with the justice of God, any more than the piety of Josiah, for the kingdom of Judah, guilty of the blood spilt by Manasseh, that it might escape the ruin decreed by God.

This revenge, the souls of the martyrs, groaning (Rev 6:9) under that dreadful butchery of the 5th Seal, invoked earnestly with their prayers: God promised, as soon as the Pagan Roman tyrant, by the addition of those who still remained to be slaughtered, had filled up the measure of iniquity (Revelation 6:11). This time of retribution had now arrived in the blowing of TRUMPET judgements.

The first four of these trumpets are the cause of the less extensive and minor plagues on the Western Roman Empire or Latin world. The Roman bishop was to be healed, and from that time to become at least the head of that world. 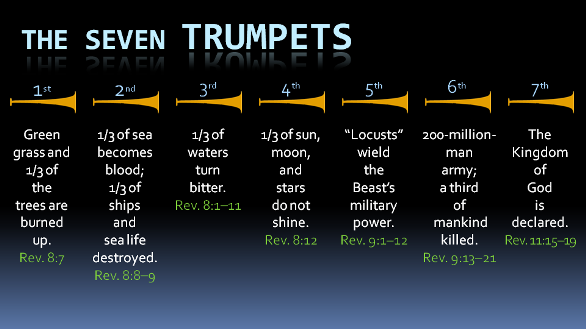 Before the Seventh Seal is opened, Four Winds are prophesied in Rev 7:1.

Revelation 7:1 - And after these things I saw four angels standing on the four corners of the earth, holding the four winds of the earth, that the wind should not blow on the earth, nor on the sea, nor on any tree.

Four Winds = War on Every Side

Jeremiah 49:36 - And upon Elam will I bring the four winds from the four quarters of heaven, and will scatter them toward all those winds; and there shall be no nation whither the outcasts of Elam shall not come.

Jeremiah 51:1 - Thus saith the LORD; Behold, I will raise up against Babylon, and against them that dwell in the midst of them that rise up against me, a destroying wind;

Jeremiah 51:2 - And will send unto Babylon fanners, that shall fan her, and shall empty her land: for in the day of trouble they shall be against her round about.

Jeremiah 18:17 - I will scatter them as with an east wind before the enemy; I will shew them the back, and not the face, in the day of their calamity.

Daniel 7:2-3 - Daniel spake and said, I saw in my vision by night, and, behold, the four winds of the heaven strove upon the great sea. And four great beasts came up from the sea, diverse one from another.

Four winds refer to the conflict of nations on every side, rushing against each other with war and the sword, and contending for dominion and empire.